When the Covid-19 pandemic and the subsequent lockdown took hold in Greg Garcia’s community in Sacramento, he knew it was important to apply some lessons he’d learned in 20 years of working with youth as a counselor and program manager: Listen to what young people say and need, and facilitate them to take leadership.

“The recurring theme is youth voice and enabling young people to lead the charge in designing what they need,” Garcia says.

As a program manager for the Sacramento chapter of citiesRISE, a new organization working at the systems level to address and prevent mental health issues among youth, Garcia needed to figure out how young people were relating and gathering — and what they were experiencing — when they were no longer connecting physically.

He found out that many were “gathering” in virtual pop-ups to socialize and play Skribbl.io and other online games. “So we decided to have virtual hangouts, trying to stay connected to young people that we’ve been working with, seeing how we can help out, give them a place to listen and talk,” Garcia says. “We learned about pop-ups that are happening in Sacramento, and we tried to infuse a few mental health components within the pop-up. Build a relationship while you’re hanging out with them through COVID.”

He also thinks the pandemic has made it easier to talk about mental health issues and the emotional and stress-related challenges that everyone is now dealing with to one extent or another. “Now I think you can talk about things that you normally couldn’t talk about because people couldn’t see eye-to-eye on it,” he says. “Now everybody understands. Hopefully people change how they view mental health. We’ve all had something traumatic happen, and it’s become a common experience.”

Garcia didn’t set out to work in counseling or with young people. When he enrolled at UC Davis as an undergraduate in the early 1990s, he chose biochemistry as his major. Then a couple of things happened that changed his direction. He took a psychology class and really liked it. And he got involved in leadership with the school’s Asian and Pacific Islander students.

Garcia’s parents had migrated to California from the Philippines in the 1950s as teenagers and settled in Vallejo. Garcia got active with community youth groups in high school and continued this work in college, where he also explored Asian American studies. Immersing himself in ethnic studies opened his eyes, he says.

“I realized that people of color live in two worlds and I started learning how I balance them, how I try to fit in culturally,” he says. “That helped me create the frame I worked in.”

After completing a degree in psychology, he stayed on campus, working as a program assistant with the Asian American Studies Dept. Around that time, he also attended an annual Filipino American Youth Leadership conference. After the conference ended, young people, most of them high school-aged, still wanted to connect, he recalls. 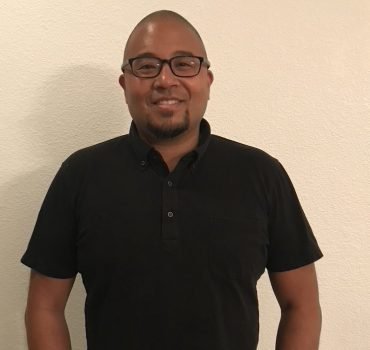 “We would meet at people’s houses, and I was the adult in the room,” he says. “People said you’re great to talk to, and I started thinking I might as well make a career out of this somehow. That’s how I discovered the counseling program at Sac. State (California State University, Sacramento).” Garcia ended up with a master’s in counseling from CSU and at the same time, got experience putting his counseling and people skills to work at Asian Pacific Community Counseling in Sacramento. He also discovered what would become his focus for the next two decades — addressing mental health issues as a clinician and a savvy cultural worker and mentor. Garcia became like an older brother — a trusted figure who was in tune with his community. He knew how to meet young people where they were at, and to let them feel heard while helping them foster their own ideas and leadership skills.

“A lot of it had to do with experience,” he says. “I knew firsthand what the issues around alienation and identification felt like. I understood there’s another layer outside mental health, a whole cultural aspect that wasn’t being addressed. I thought a lot about this question: How do we provide services to young people of color? They weren’t getting it at home or school. We provided that space for them. I became an advocate for culturally relevant services.”

Love and career opportunities lured him away from California for 15 years. On a trip to Seattle in the mid 2000s, he met his future wife, Lily, and they fell in love. He moved to Seattle to join her and began working at a substance abuse treatment and prevention program aimed at Asian and Pacific Island youth, rising to become its executive director. After nine years there, he took on a position as community impact manager for Seattle’s United Way program.

But last year, his passion for working with young people called him back to Sacramento and the city where he’d first discovered his talent for doing so. He became the program manager for citiesRISE, a four-year-old global organization that is working to develop new strategies for addressing and preventing the rise in mental illness among the urban young.

As its name implies, the organization focuses on cities, for two principal reasons. Today, more than half of the world’s population lives in cities, and, by 2030, roughly 60 percent of city residents will be 18 and under. citiesRISE is working in five cities around the world piloting and testing new strategies in Seattle; Chennai, India; Nairobi, Kenya; Bogotá, Colombia; and Sacramento.

Prior to Covid, Garcia and the Sacramento chapter were working to develop a “huge network of leaders that advocate for change in mental health.” That mission continues, only now “we’re meeting young people online and trying to get some traction on helping them feel better right now by teaching people how to do it themselves, and teaching providers.”

One thing they are hearing consistently from organizations and people that work with youth, no matter what the group has as its focus: “Mental health issues have risen to the top of concerns for a lot of young people.”

Recently, the organization surveyed 1000 young people in all five of its cities, including 277 in Sacramento. The Sacramento survey showed high levels of anxiety, stress, loneliness and fear among young people.

“A lot of young people are upset, scared, worried, frustrated,” Garcia says “Some are basically grieving the fact that the rest of their senior year is done — they can’t have prom, many won’t be able to walk (in graduation ceremonies). In Sacramento, most young people don’t even know where to go for mental health help. And to get help, they’d rather talk to a friend or a peer versus an adult professional.”

And that leads to a final lesson: if you want to reach and work with youth, you must go where they are, which, according to the survey, is mostly on Instagram and TikTok. A lot of traditional organizations “are not reaching young people where they’re at,” Garcia says. “They’re still using billboards and email. Young people don’t check email.”

The right strategy, Garcia says, is to help youth chart their own direction — something he’s been doing for the past 20 years.