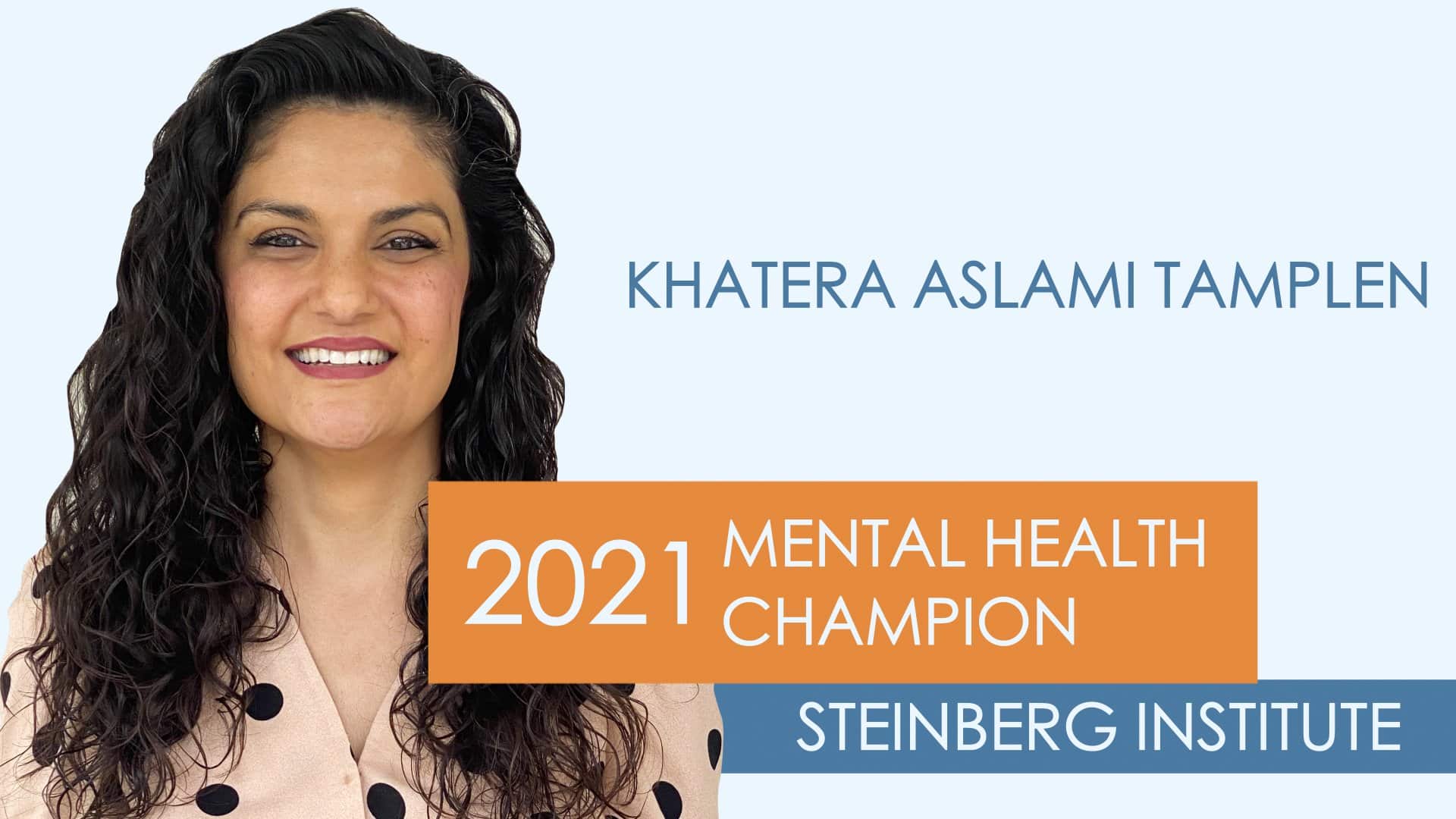 With Community Support, a Child War Refugee from Afghanistan Overcame Loss and Trauma to Become a Peer Pioneer

Khatera Aslami Tamplen was just a toddler when she and her parents fled Afghanistan during the Soviet occupation of her country. Her family had just found out her father was on a list of pro-American sympathizers targeted for execution, so they had to escape by night.

It was a terrifying journey. Her family missed the first truck sent to smuggle them out, and only later found out that truck was blown up by a Soviet jet. Sick and feverish, they were crammed into caravans with other refugees, robbed at gunpoint and forced to hide under bridges while Soviet tanks and jets rumbled overhead.

“I was too little to remember much of the escape, except the feeling of being in constant fear,” she says. “By the grace of God, we were able to get out of the country in time.”

Aslami Tamplen’s family was part of a flood of refugees that swelled to 5.5 million during the Afghan-Soviet war in the 1980s, which killed as many as 2 million men, women and children in Afghanistan. They made it across the border to Pakistan, and when Aslami Tamplen was 4, they were granted asylum by the United States and settled in Fremont, California. By then, their suffering had left her parents with serious psychological and medical problems. Her father’s face was partially paralyzed, and her mother had developed tremors that dashed her hopes of becoming a cosmetologist. “She was so sad not to be able to fulfill that dream and support the family financially,” Aslami Tamplen says.

In Fremont, Aslami Tamplen quickly picked up some English and, by the age of 7, took on the heavy task of serving as her family’s primary interpreter. Among other responsibilities, she accompanied her parents to all their clinic and hospital visits. Fearful of making an error in translation, she spent hours re-reading new mail for her parents. She also served as an interpreter for her mother’s weekly appointments with a psychiatrist, which she found still more difficult to understand.

“We were so blessed to have support from the medical system, but as a child I struggled to navigate it,” Aslami Tamplen says. “My worry that I was not interpreting appropriately really increased my fear and self-doubt and anxiety at a young age. I got in trouble with adults who did not know what I was going through. I would do my best to put on a smile, and then at night I would cry myself to sleep.”

She found solace in the company of other girls from her home country – Fremont has the world’s largest community of Afghans outside Afghanistan – and spent many happy hours playing with them and joining in traditional celebrations. She also found peer support in her high school’s thriving Afghan Club. But when she was in college, the al-Qaeda attacks on September 11, 2001 changed everything. In the months that followed, hate crimes against American Muslims soared.

“It was so heartbreaking to see the loss of life and then to be blamed for it,” Aslami Tamplen recalls. “Because this was our country, too. Before 9/11 we were not on peoples’ radar – many didn’t even know where Afghanistan was. But afterward everyone viewed us with fear and suspicion. We saw the hate crimes and violence toward us increase. I worried about my mom wearing a headscarf outside, about her being attacked as many people in our community had been.”

Wracked by anxiety and depression and remembering her mother’s positive experiences with a caring psychiatrist, Aslami Tamplen sought care herself at school and afterwards. But her experiences could not have been more different. “I felt invalidated,” she recalls. “I was only given five minutes with someone who prescribed so many different pills it was staggering.” The side effects from some of the medication eventually became so severe that she had to seek emergency care and hospitalization.

Aslami Tamplen felt further invalidated by the healthcare system during a personal tragedy several years later: the loss of her infant daughter Lela. Although she repeatedly told the staff at the northern California hospital where she was to give birth that she felt her unborn daughter was in distress, she says she encountered “constant dismissiveness” and was brushed off for 36 hours. Her baby, Lela Yasmeen, died three days after delivery. Even today, Aslami Tamplen still wonders if her name or the color of her skin affected the way she was treated.

She and her family were devastated by Lela’s death. Aslami Tamplen struggled with agonizing depression and thoughts of suicide, then shame for wanting to die.  Her husband, friends, and community, along with her spiritual beliefs, helped her slowly regain hope for the future.

“It was incredible for me to have support from peers who have experienced loss, pain, racism and discrimination and shared how they overcome those barriers,” she says. “It is one reason I’m so passionate about peer support. In this work I feel we’re not only helping others and the community but healing our own trauma.”

Discrimination, loss and trauma have given Aslami Tamplen a strong sense of empathy, a trait she calls on every day in her current position as consumer empowerment manager at Alameda County Behavioral Health Care Services and an advisor to several state and national health care boards.

Aslami Tamplen became involved with mental health outreach not long after earning a degree in recreational therapy at Cal State East Bay. In her first job out of college, she interned at a local inpatient psychiatric facility and was introduced to  Wellness Recovery Action Plan (WRAP), a strategy people can use to recover and stay well after a mental health challenge and a key tool in peer support efforts. “I immediately connected to the peer support field,” she says. “It brought people together to find meaning regardless of the mental or physical challenges we were facing.”

She was later hired as a rehab therapist by the facility, where she led the peer support program that inspired patients through stories of people’s recoveries. In her job with Alameda County, she has gotten involved as an advocate for several bills promoting the use of peer support in mental health. One, SB 803, passed last year and establishes a formal system for training and certifying peer support specialists in California.

“We’re very excited about the opportunity for California to finally join the 48 other states who have already recognized peer support certification,” she says. “Now we’re going to take it to the next level and help the state lead in this field.”

Aslami Tamplen stresses the need for community inclusion, input and feedback in mental health care to combat stigma, prejudice, and discrimination. She wants to ensure providers are engaged and the environment is welcoming to the new cohort of peer support specialists.

“We want to say, ‘Don’t perpetuate the stigma or prejudice that people don’t recover, because we know people are resilient,’” she says. “We know we can recover with the right support and services.” She believes it is critical to create alternatives to jail for people in a mental health crisis and to use mental health teams and peer services to respond to their needs.

Alameda County’s rich assortment of peer-run services have proven themselves during the COVID-19 crisis, Aslami Tamplen says, providing critical assistance to the homeless community and other disenfranchised groups. Now as she raises a 10-year-old son with her husband while working full-time and caring for her mom, she hopes that peer and community support will make mental health services in Alameda County feel safer and more welcoming for everyone.

“I am really passionate about using what we have in our community and seeing that our services do not traumatize or retraumatize people,” she says. “That way, when people seek further support, they’ll be in a place of safety where they can advocate for themselves.”