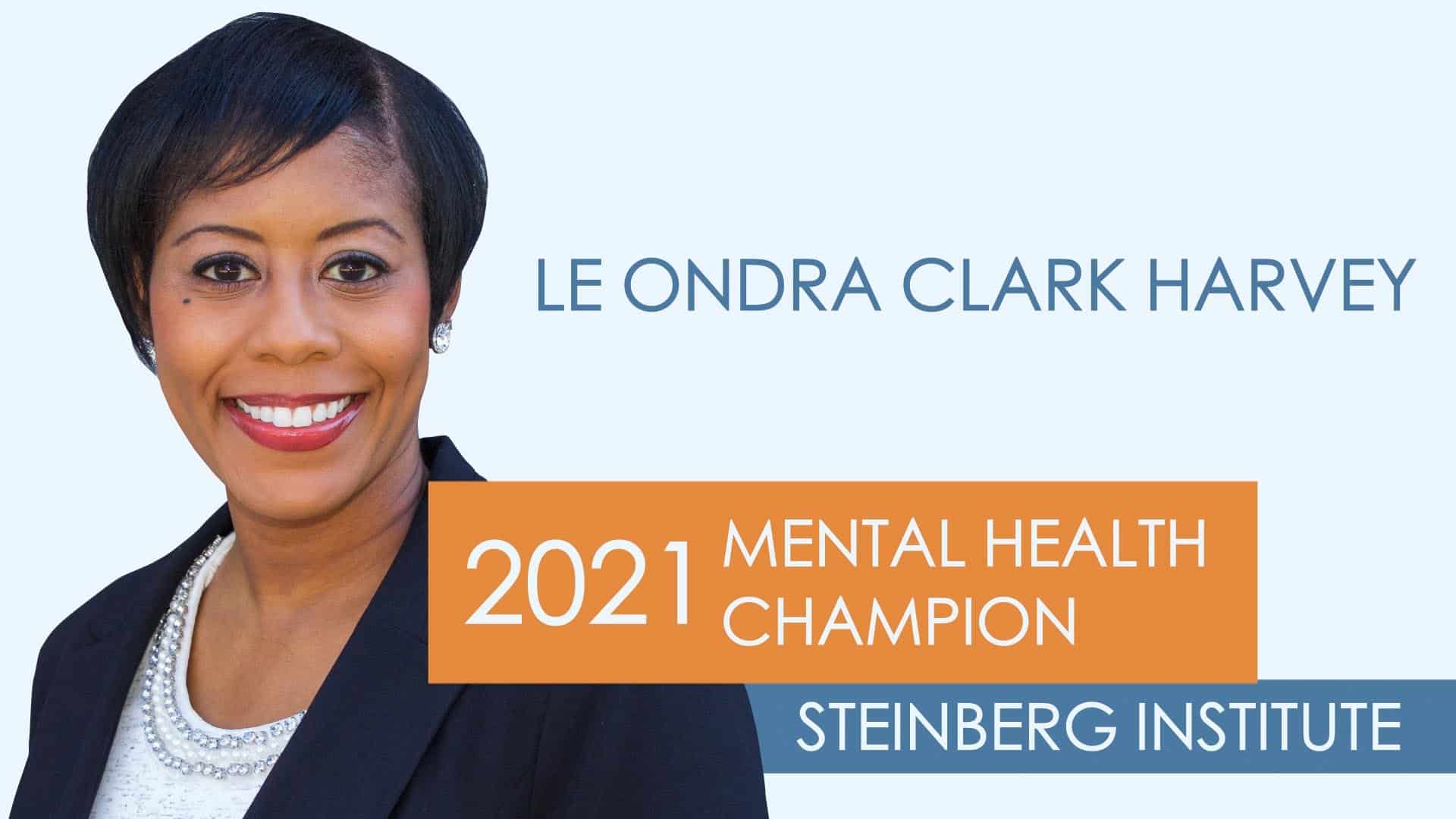 When a counseling session she was conducting with an already traumatized little girl was interrupted by gunfire, Le Ondra Clark Harvey came to a realization: If she really wanted to have the kind of impact her patients so urgently needed, she needed to transform the world beyond her office.

Her epiphany came during an in-home therapy session with a child in South Central Los Angeles, who she was seeing as part of her work as a post-doctoral fellow at UCLA.

“I was in her room doing what we call a ‘trauma narrative’ that involved her writing and drawing pictures about her story and her life,” Clark Harvey recalls. “Suddenly the lights went out because the family hadn’t been able to pay the bill.”

The two moved near the window to continue working, but the next thing Harvey remembers was the sound of gunshots and throwing herself over the child to protect her from a drive-by shooting.

“There I was in the middle of her bedroom floor sheltering a little girl with the lights out and thinking, ‘Oh God, I am being traumatized – and she’s being traumatized as we’re trying to work on her trauma. It’s insane,’” Clark Harvey recalls. “Then her uncle burst through the door, waving this piece of paper and saying he was really upset because the afterschool program down the street was going to be closing early because of budget cuts.”

In that moment, she said, “I realized there were so many systemic issues impacting that family that I just could not do the work I was trained to do. There had to be a way I could use my voice and experience to change the system at large. That propelled me to look for policy opportunities – so I could do something more.”

That day was a turning point in Clark Harvey’s mission to transform mental health among disenfranchised people of color. She had grown up around a devoted mental health professional — her mother worked as a licensed marriage and family therapist for more than 25 years – but Clark Harvey initially vowed never to work in mental health.

“My mom worked in a big fancy hospital where you had to pay tons of money to get psychological and rehab treatment,” Clark Harvey says. “I grew up thinking that mental health treatment and substance use disorder treatment was just for rich people. At some point in my undergraduate schooling, I learned that wasn’t the case. I changed my major to psychology, and I fell in love with it.”

She studied psychology and community counseling at Cal Poly Pomona and received a doctorate in counseling psychology from the University of Wisconsin-Madison. Along the way, she got her counseling license and worked in community and hospital settings. She also earned a fellowship at University of California at Los Angeles and an internship at USC’s Children’s Hospital Los Angeles, where she trained in integrative and multidisciplinary care.

“That model was amazing,” she says. “Our team included teachers, social workers, dentists – you name it. It really impacted how I view systemic care.” Her dissertation focused on a community mental health center and which practices best served – and didn’t serve – its patients of color. The effort reflected her desire to get academia’s “wonderful, cutting-edge research” into the hands of people who work on the ground.

But what was the most powerful way to do that? Though she was offered a job at UCLA, her heart was set on system change. Instead, she accepted a one-year position as the first social science fellow ever at the California Council of Science and Technology. Three months later, a California Senator offered her a job as a policy analyst – giving her keys to the policy kingdom. And three years after that, she became chief consultant for the business and professions committee of the California Assembly. “I was just 32 or so, so it was an amazing honor,” she says.

In her six years at the legislature, Clark Harvey gained an intimate knowledge of how the legislative process worked – and paved the way to her current position as chief executive officer of the California Council of Community Behavioral Health Agencies, representing behavioral health clinics and agencies across the state. First, Council founder Rusty Selix recruited her as the Council’s director of policy and legislative affairs, a position she tried to refuse.

“I said, ‘No thank you,’” she laughs. “I had just had my baby. He was 1 year old, and I thought, ‘Oh my God, no way!’ And he said, ‘I have ALS and I don’t think I’ll be around much longer. It’s really important for me who replaces me. So would you please just apply?”

Reluctantly, Clark Harvey agreed. And by the time she interviewed and met the board, “I realized it was a perfect fit for me, reflecting my years of policy experience and my passion for behavioral health.”

Fast forward to the present. Her team has worked furiously to help the clinics that provide mental health counseling and care to people in communities that are some of the most underserved – and heavily impacted by COVID-19 – in the state. When the cash-starved clinics needed to pivot almost overnight to virtual care, the Council scrambled to help them get mini-grants so they could buy telehealth equipment and keep their services going.

“We were literally putting cash in their hands,” she says. “If they needed 10 more iPads or laptops, we’d provide the mini-grants. If their patients were struggling with social needs or lacked internet connections, the coalition helped clinics drop off groceries, gas cards, and even bicycles.”

As the state emerges from the pandemic, Clark Harvey will keep pushing to expand access to food security, housing assistance, and behavioral health and school-based mental health services and to address longstanding issues of racial inequity – such as making it easier for people in low-income neighborhoods to get medication refills and appropriate referrals.

“We’re not just in a COVID-19 pandemic — we’re in a racial pandemic,” Clark Harvey says. “We’re taking advantage of opportunities to lift up the work as it pertains to race and social equity.”

As ambitious as Clark’s goals are for advancing social justice, she also looks forward to getting out of crisis mode – and spending more time with her family. She and her husband have “two small, needy boys,” ages 2 and 4, that want her time.

“I’ve never been good at this thing called balance,” she says. “My reprieve right now is play time with the kids. They need it, and so do I. So whenever I can, we play hide and seek and read bedtime stories and have fun. And that’s my vacation.”

As demanding as her work is, though, it’s also her passion. It gives her the opportunity to represent in-home treatment workers, hospitals, and community centers – and to keep in mind a little girl in South Central Los Angeles terrorized by a drive-by shooting during a therapy session. “These are the folks I represent,” she says. “It’s like coming full circle.”