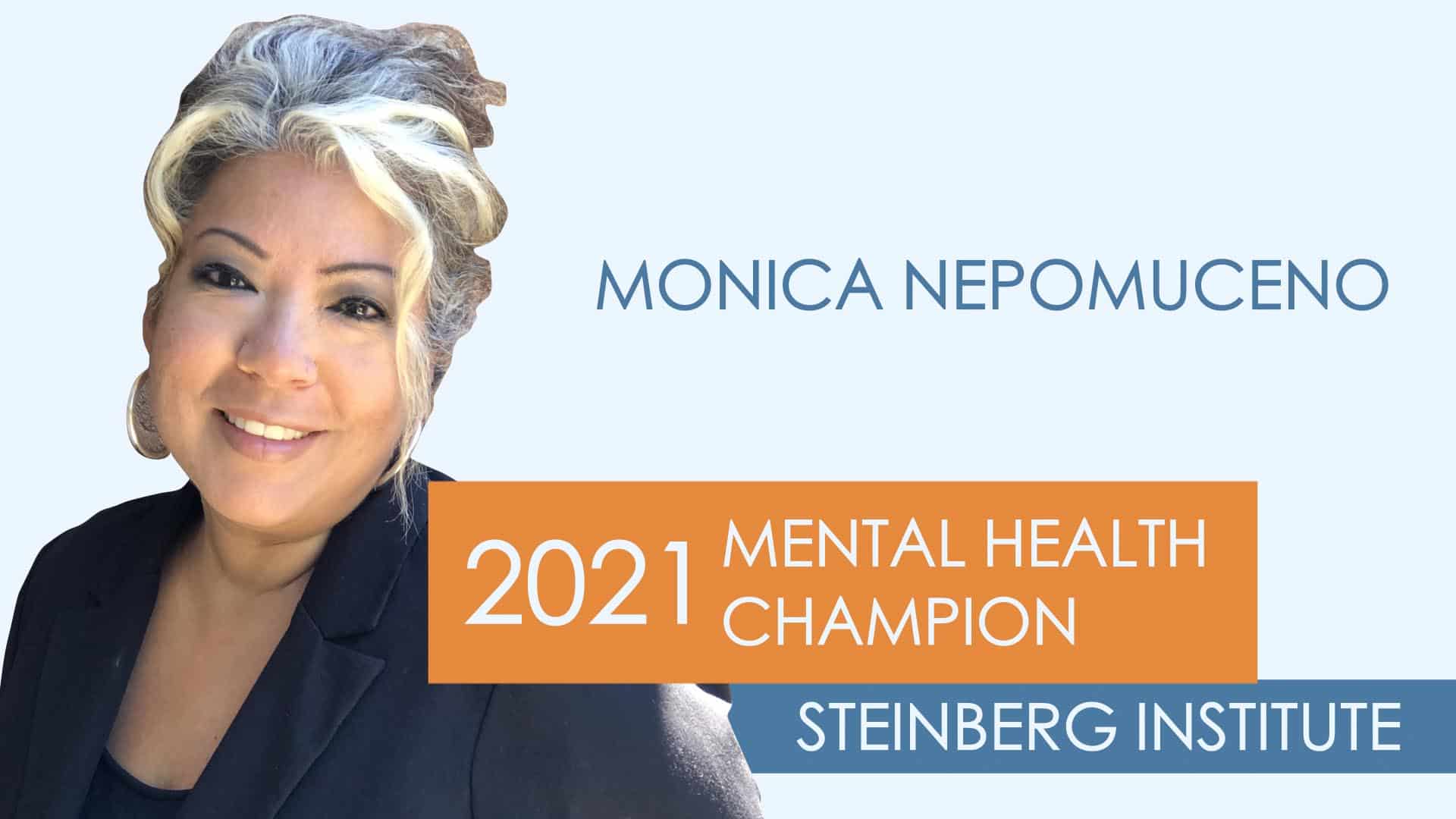 “I keep picturing these little kids playing some game in this big field of rye and all…And I’m standing on the edge of some crazy cliff. What I have to do, I have to catch everybody if they start to go over the cliff – I mean if they’re running and they don’t look where they’re going I have to come from somewhere and catch them. That’s all I’d do all day. I’d just be the catcher in the rye and all.”
— Holden Caulfield, 16, from J.D. Salinger’s novel Catcher in the Rye

Monica Nepomuceno has something in common with the protagonist of J.D. Salinger’s classic novel: She wants to save all the children in danger of going over the edge of some crazy cliff.

In Nepomuceno’s case, she spends each day battling for all the schoolkids and teens in California who suffer from suicidal thoughts or other mental health disorders.

As an education programs consultant at the California Department of Education, Nepomuceno has worked on mental health and suicide prevention since 2009 – a year marked by a cluster of train-track suicides among high school students in affluent Palo Alto. Nationally, suicide is the second leading cause of death for youth ages 10 to 34. As chair of the Student Mental Health Policy Workgroup and its subcommittee on suicide prevention, Nepomuceno is crusading to slash the number of school-age suicides.

“Monica is relentless, bold, and willing to do whatever it takes,” says Marlon Morgan, a former school counselor who is now executive director of Wellness Together School Mental Health, a California nonprofit that partners with schools to provide mental health services. “She’s also extremely committed and genuine. She possesses the communications and relational skills to get people on the same page, even if they don’t start out that way.”

One reason Nepomuceno is such a passionate advocate for children in pain is that she has been there. She developed anxiety as a small child that was exacerbated at age 9, a time that coincided with the hostage crisis in Iran and rumors that her beloved big brother in the Marines would be sent to war. It turned out her brother wasn’t called to combat, but her anxiety didn’t go away.

“It is like a pot of boiling water in my belly that just kind of spreads through my body,” she says. “I feel like I’m more sensitive than other people, as if I carry my nerve endings right at my skin.” She assumed everyone around her was plagued by the same crushing anxiety she felt. It wasn’t until she was in her early 30s and had her first panic attack that Nepomuceno realized she had a treatable condition.

Her panic attack was triggered by trying to work full-time and teach while going to graduate school. “It felt like the weight of the world was on my shoulders,” she says. “I started to hyperventilate. At that point I was just like, you know what? I don’t care if I don’t finish school. I don’t care if I get fired. I don’t care right now. I just need to live.”

With no resources available at her university to help her manage her anxiety, she turned to her mother and older sister for help. “They made me some hot tea and just sat with me and talked and validated everything that I was feeling,” she says. “They were my source of strength at that point, so I was able to forge on.”

The next time she had a panic attack – some years later – she was seeing a therapist and working on her anxiety issues. This time, she was able to manage it with that support and the tools she had learned in counseling.

Nepomuceno also experienced the power of counseling in her first job as an outreach specialist in a rural elementary school in Sacramento County. Soon after she and her colleagues brought in a therapist to work part-time with students with behavioral problems, it triggered an unexpected change. Children who had been sullen and disengaged were smiling in class.

“There was a sort of hope and joy in their faces that wasn’t there before,” she says. The school-based therapist also worked with the teachers to help them accept, respect and support “problem” students, regardless of test scores or grade point averages.

“That was years before anyone talked about students and trauma, and I’m so happy now that we have lots of initiatives around mental health and social and emotional learning,” she says. “This way we can help students self-regulate and communicate their needs in a better way than just acting out.”

In 2007, Nepomuceno became an education programs consultant at the California Department of Education, a position she still holds today. She wants to help ensure students with mental disorders never experience the torment, scorn and isolation suffered by some of her classmates in high school who were withdrawn or suicidal. Those kids, she recalls, were shunned by other students.

“There was a ton of bullying, drinking and drug use in high school, and people tried to help students with these issues, but if kids were depressed or suicidal, nobody talked about it,” she says. “There were no conversations about getting them help. Students would say things like ‘I can’t believe they’re so weak’ or ‘what a loser’ — things that perpetuated the stigma. There were no initiatives on the part of the school or community to help them, nothing.”

To root out such stigma and indifference, Nepomuceno has been a determined advocate for student mental health. She leads a monthly webinar series on suicide prevention and makes sure that all California school districts have the tools to identify and support students thinking about suicide and to create effective suicide prevention policies.

“I encourage teachers to model the behavior they want,” she says. “If they’re having a bad day, I tell them, it’s okay to let your students know and ask them to be gentle with you today.” She also encourages them to teach kids techniques like breathing and exercise to help them when they’re under stress and to ask for help if they need it.

“I think about all the little Monicas out there,” she says. “I don’t want other children and youth to be exposed to prolonged suffering without any support.  If I had learned coping strategies and mindfulness, perhaps my life would have been more enjoyable.”

As a state department of education coordinator for the Cal-Well Project,  a federal initiative designed to raise awareness of mental health, she has also helped thousands of school staff get trained in Youth Mental Health First Aid. And – in one of her favorite initiatives – she has led the department to partner with the California branch of the National Alliance on Mental Illness to support student-led mental health clubs on high school campuses. “I’m just amazed at the passion these students have,” Nepomuceno says.

Membership is open to everyone. The students are involved in everything from sharing wellness information and hosting mental health fairs to setting up tables outside AP test locations to hand out stress balls and fortune cookies that say, “You can do this.” The students are also hosting self-care webinars and sending positive messages through Instagram and Snapchat, she adds.

As the state and country emerge from the pandemic, it’s these youth who Nepomuceno puts her faith in.

“What gives me hope for the future is that these students are so informed and eloquent, and their commitment is just amazing,” she says. “They are true warriors who are going to be lifelong advocates.”