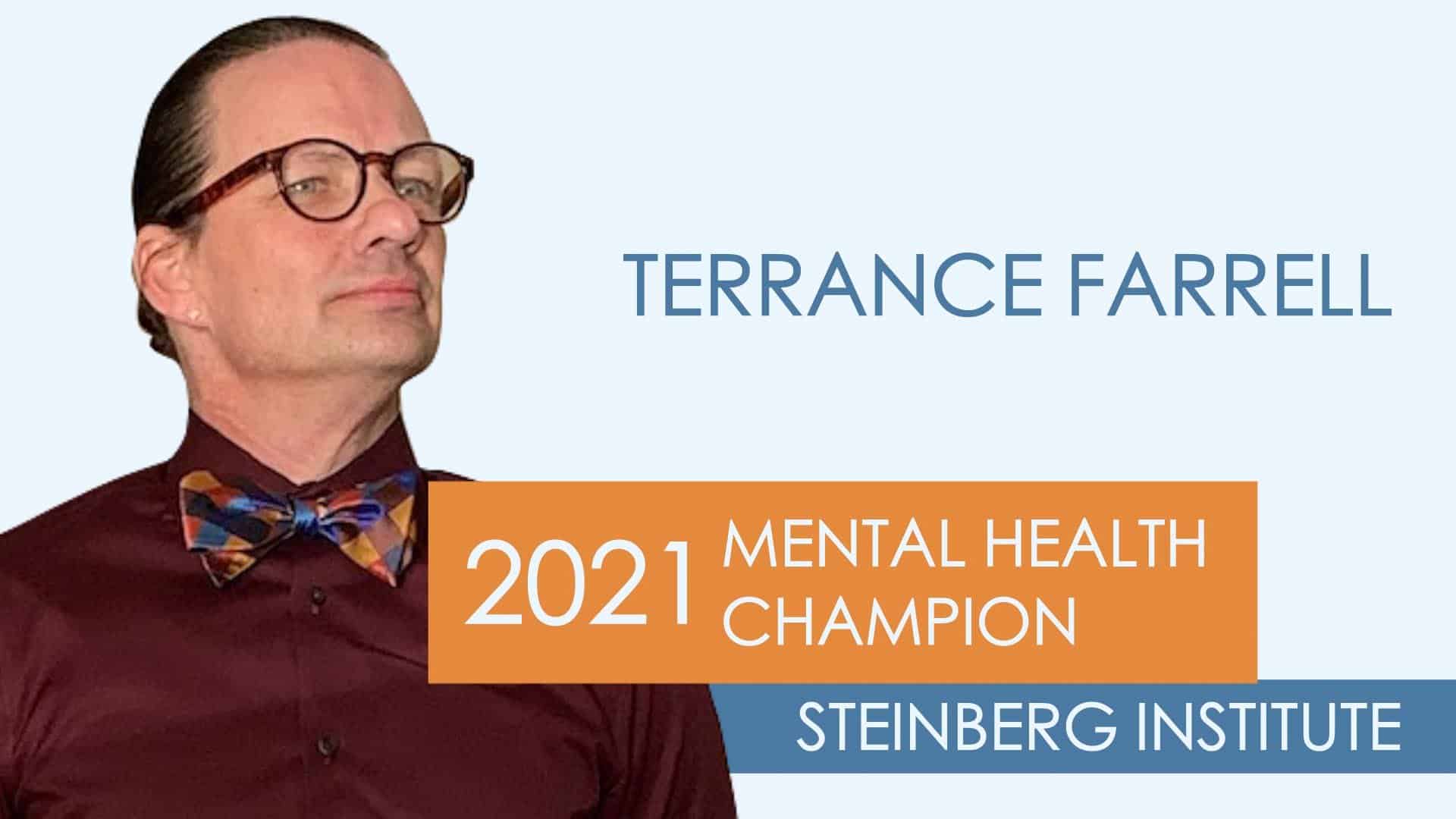 Out of Tragedy, A Bereaved Boyfriend and a Family Work to Create Lasting Meaning — and Ease the Pain of Others

In January, Steinberg Institute Executive Director Maggie Merritt received a wrenching email. “My name is Terrance, and my boyfriend has struggled with bipolar disorder since he was 12 years old,” the message said. “In September, after being off his meds for five days, he jumped in front of a light-rail train and finally ended his struggle.”

The email, from Terrance Farrell, went on to say that even though the death of his boyfriend, Cameron Cosentino, “was very traumatic for me, and still is,” he and Cameron’s mother, Vickie Cosentino, “wanted to do something in Cameron’s name” to spare other people from the same fate and to raise awareness about mental health issues. “I started a fundraiser on my Facebook page with all donations going to the Steinberg Institute and we’ve raised $1300.”

The fundraiser — set up with no advance contact with the Institute — went on to raise more than $1,800. It also helped spread the message on social media about the need to improve mental health services and make them more widely available.

“This didn’t have to be,” Farrell wrote on the Facebook fundraising page. “Mental health takes a backseat to what is called physical medicine. We have to change the stigma that is so prevalent in society today.”

They’ve also begun another project: doing research to locate schools and programs that do a good job helping young people who are grappling with mental illness. They hope to raise funds to provide support and financial assistance for families.

Cameron was just a month shy of his 22nd birthday when he died. He and Farrell had been introduced by a mutual friend two years earlier but Farrell, who was older, initially kept his distance. “I thought, no, this could never work,” Farrell told me during a Zoom interview. “It was an unusual pairing, but he pressed it and he grew on me. He was a unique person, super smart and funny, and he had an old soul.” 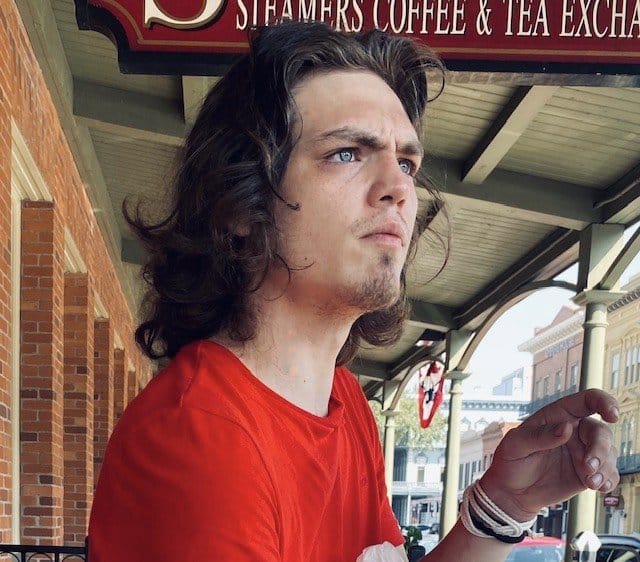 Cameron, in September 2020, two days before his death.

The two spent a lot of time at Farrell’s house in Sacramento, looking after his mother, who has significant impairment from Alzheimer’s disease. “I work full time as a human resources manager and when I come home, I take care of my mom,” Farrell says. “Not everybody wants to hang out with someone that does that. But he was totally great, totally accepting. He loved talking with my mom. In fact, he always thought it was a great thing that I took care of my mom, that it made me a good person.”

The couple also liked to spend time walking and exploring downtown Sacramento or bingeing on Netflix. Other times, Cameron would need to be by himself. “When he was in his down moods, he would just tell me, ‘Terrance, I need some me time,’” Farrell recalls. “And that was okay with me.”

Cameron’s unique gifts and challenges became evident early. Vickie and her husband, Patrick, adopted Cameron at 14 months. At age 2, he wrapped his hand around a hot muffler and held on so long it blistered — yet he didn’t cry until hours later. At age 5, he’d sit on the floor during his older brother’s sessions with a Spanish tutor and spout answers. By 1st grade, he was reading at an 8th grade level.

Cameron’s precocious intellect, combined with a hearing impairment, left him isolated from his peers. “He always picked the person who spoke loudest as his friend,” Vickie says. “He was so advanced, though he was the smallest kid in class, that he never fit in.”

As time progressed, he found it harder to focus. Doctors at Kaiser diagnosed him with attention deficit hyperactivity disorder and prescribed different medications — with little or no benefit. “Some made him crazy; others didn’t work at all,” Vickie says.

By 5th grade, the Cosentinos doubted he had ADHD. They suspected bipolar disorder, but doctors were reluctant to make that diagnosis, fearing it would label him. That same year, Cameron showed his creativity in a school project: “He wrote a book for young kids on how to blow your nose, using images of zoo animals blowing their noses,” Vickie recalls.

But by 7th grade, “he was out of control,” she says. “He started self-medicating because we weren’t medicating him. He was like the wild child. We recognized that if we didn’t intervene, he’d more than likely die of a drug overdose.”

The issues the Cosentinos experienced are all too familiar to many families dealing with the mental illness of a child: He made friends indiscriminately and took drugs with them. He stole household goods and pawned jewelry. He disappeared for days on end. And the system seemed incapable of helping him.

“It became more apparent that he had bipolar,” Vickie says. “He’d be happy, happy, happy, then rage like the fires of Hell were in his eyes. He’d attack people with his fists, but he was also the guy who’d help you look for your dog for three hours.”

Desperate, the Cosentinos began searching for special schools. He went to one in Utah for a year, then lived with a family friend in the Colorado wilderness for a while. He came back home, tried public school and home-schooling, then went to a school in Nevada. Some of these worked for a while, but the success was never sustained. He returned home at 17-and-a-half and managed to complete his final high school credits by dictating assignments while Vickie wrote down his words.

With age, the rages diminished but his struggles did not. He grappled with his sexual identity and came out as gay to his accepting parents. He got in trouble with police and went to jail for minor offenses. Symptoms of psychosis also became more prominent.

“He had six different voices in his head, and one of them was always advocating self-harm,” Vickie says. He ended up in the hospital several times, after harming himself or attempting suicide.

Meanwhile, medication “zombied him out,” and made him feel sleepy. He told Farrell that he likes to feel things “and when I’m on medication, I don’t.” He also said that when he’s off his medication, “his friends — the six people he had in his head — don’t come around,” Farrell recalls.

When they first got together, Cameron kept Farrell separate from his parents. But once he and the Cosentinos met, Farrell said, he felt immediate acceptance.

“I was so happy he found somebody that seemed to accept him for who he was and wasn’t trying to change him and/or set expectations,” Vickie says. “He always tended to talk more with older people who are less apt to judge or have a better poker face.”

Farrell treasures the two years he got to spend with Cameron and wrote in an on-line tribute that he had been “looking forward to spending the rest of my life with you.” He still suffers feelings of guilt that he wasn’t able to protect Cameron. 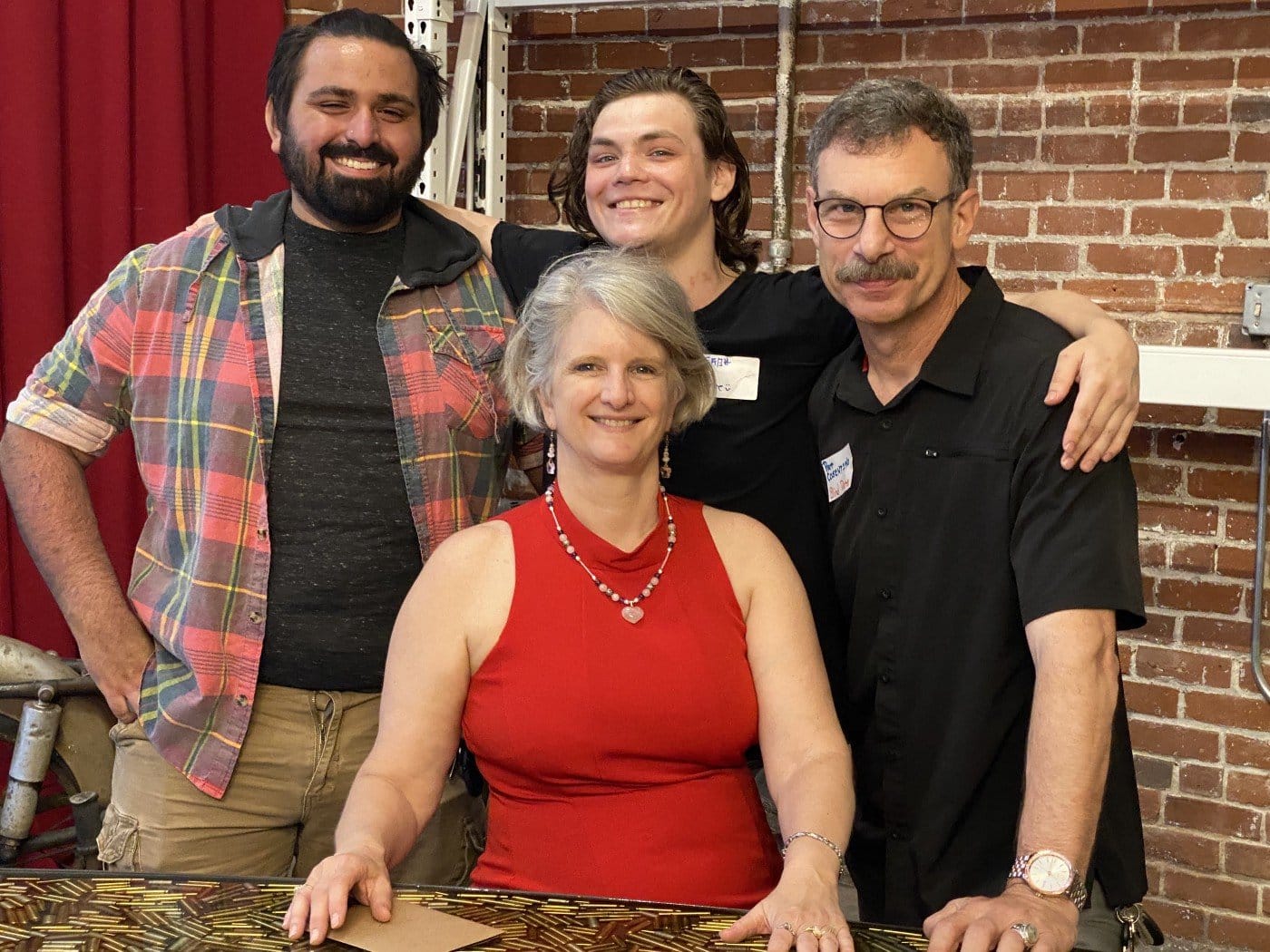 “The mothering side of me wants to say, I could have helped him,” Farrell says. “If only I had done this, if only I had done that.” He also has grappled with anger. “Initially I was mad at him. Then I finally realized the pain he must have been in. How can I be mad at him for that?”

One thing Farrell is proud of is that in death, Cameron also gave life by donating his organs. “Four people are now living because of him,” Farrell says. “Somebody got his heart, somebody got his liver and two people got his kidneys.”

After Cameron’s death, the Cosentinos and Farrell continued getting together to talk about Cameron and how they could honor his legacy and create lasting change. “Everyone came to the house and we had several sessions over dinner,” Vickie says. “We talked about what we could do to address these mental health issues.”

They agreed on two priorities: the need for better diagnosis and services for children, and the need to support special schools and make them affordable. That way, Vickie says, “these kids don’t lose their self-esteem and can function in society without feeling like a failure.”

In January, three weeks after starting their Facebook fundraiser, Farrell posted a message of encouragement. “With six days left, we have exceeded our goal,” he wrote. “Mine and Vicki’s hope is to find another solution. Make treatment available when it’s needed (earlier) and continue that treatment as long as needed for others that have that same struggle.”