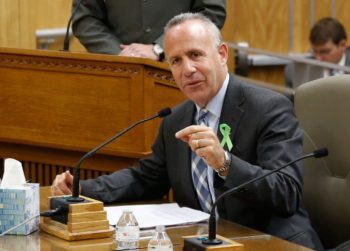 Assembly Bill 1315 will help launch a paradigm shift for mental health care in California, fueling a move from a fail-first to a care-first model.

SACRAMENTO, CA – Gov. Jerry Brown on Monday signed into law a groundbreaking measure that aims to shift the paradigm for mental health treatment in California from one centered on late-stage crisis care to one in which the emphasis is on early detection, prevention and intervention, before a brain illness becomes disabling.

The Steinberg Institute sponsored the measure as part of its broader effort to move toward a more integrated and equitable system of health care in California, one in which brain health is treated with the same urgency and sweep as physical health. AB 1315 moved through the Legislature with strong bipartisan support, backed by an array of health care, advocacy, government and business groups.

“For too long now our treatment model for mental illness has focused on crisis care – intervening at Stage 4, well after a patient’s life has been derailed,” said Steinberg Institute Executive Director Maggie Merritt. “Our goal, just as it is with any other serious physical illness, must be on early intervention and prevention. And this bill will help make that happen.”

Each year, an estimated 100,000 young adults in the U.S. experience their first psychotic episode, an outgrowth of serious mental illness that frequently involves debilitating hallucinations and delusions. Psychotic episodes are a defining factor in schizophrenia and schizoaffective disorder, and often accompany the onset of mood disorders such as depression and bipolar disorder. These illnesses generally manifest themselves in young adults – with 40 percent of serious mental illness developing by age 14 and 75 percent by age 25.

The longer these serious illnesses go untreated, the more likely a young person will spiral down a frightening and debilitating course, unable to graduate, form relationships or hold a job. In the United States, the average delay in receiving appropriate diagnosis and treatment after a first psychotic break is 18.5 months, well after the disease has progressed.

The outrageous factor in this cycle is that we know how to intercede in the early stages of brain illness and effectively change the outcome of a disease such as schizophrenia. The treatment models exist. Multiple analyses, out of Britain and Australia, which have led the way on this research, and also out of New York, Oregon and California show early intervention works.

With appropriate treatment, most young people who receive these comprehensive services see a remission of symptoms. Through the course of their lives, they have fewer hospitalizations and suicide attempts. Much like someone in the early stages of heart disease or diabetes, people with mental illness can learn to manage their conditions.

Because of constraints on funding and training capacity, fewer than half of California’s counties offer such services, and the 24 counties that do offer them can’t support programs large enough to meet demand.

AB 1315 sets up a public-private partnership – called EPI-Plus – to provide additional funding and incentive for counties to focus resources on early detection and prevention of mental illness. The legislation creates a special account dedicated to funding early intervention services proven to be effective. The account will be funded by contributions from the private sector and federal, state and private grants. Counties can apply for awards, and if chosen, will be required to provide matching funds – essentially doubling the investment of their mental health dollars.

The tech industry already is engaged in brain health research, eager to devise technology that will help identify biomarkers and other early indicators of serious mental illness, as well as aid in monitoring and treatment. This bill provides an opportunity for leaders in Silicon Valley and throughout the private sector to sit at the table as full partners with county service providers in the battle to transform the treatment model.

“One of the most important aspects of this bill is that it underscores the shared responsibility we have as a community to embrace mental illness as a top-tier priority,” Merritt said. “This is not a state problem or a county problem. This is a public health crisis, and we need our best minds committed to advancing the standards of care.”

The Steinberg Institute is a Sacramento-based nonprofit organization dedicated to advancing sound public policy and inspiring leadership on issues of mental health.

The mental health toll from the coronavirus could rival that of the disease...
LA Times Op-Ed: How to prepare for the second pandemic — of mental health i...
Governor Newsom announces COVID-19 resources for emotional support and well...
Governor’s Special Advisor on Mental Health Seeks New Blueprint For Care In...
Gov. Newsom names Darrell Steinberg to co-chair homeless task force and Dr....
Our 2020 Legislative Package is out!
No Place Like Home proposals are in - time to give the voters what they wan...
The Steinberg Institute supports AB 890 to grant full practice authority to...
Governor Newsom names Darrell Steinberg to lead new Statewide Commission on...
Newsom Proposes Visionary Investment in Mental Health Care
click here to view more