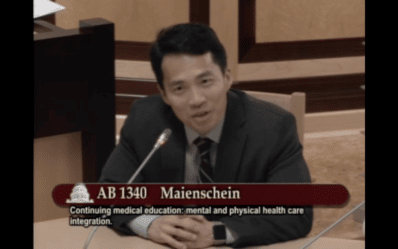 SACRAMENTO – Legislation that would help ensure primary care doctors in California are trained to recognize and treat common mental health conditions passed out of the Senate Business, Professions and Economic Development Committee Monday on a 9-0 vote. The Steinberg Institute is sponsoring Assembly Bill 1340, by Assemblymember Brian Maienschein, with the aim of forging a more integrated system of care and promoting early identification and treatment of mental illness. The bill would amend the state’s Business and Professions Code to require that the Medical Board of California consider including in its continuing medical education requirements a course on integrating mental and physical health care in primary care settings.

Dr. Jaesu Han, an associate clinical professor in the UC Davis Dept. of Psychiatry and Family Medicine, offered key testimony in support of the measure, underscoring the critical need for primary care providers to be versed in basic psychiatric care. Studies indicate as many as 40 percent of patients seen in a primary care setting on any given day have an active psychiatric condition. Meanwhile, the ratio of psychiatrists to population in the U.S. declined by 10 percent between 2003-2013, according to a 2017 report by the National Council for Behavioral Health; and nearly half the nation’s psychiatrists operate on a cash-only basis. Researchers estimate about half the patients referred for psychiatric care are unable to access services. The bill now moves to the Senate Appropriations Committee.