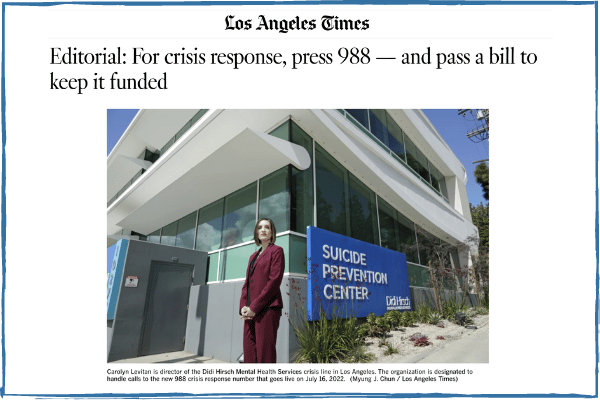 The LA Times Editorial Board calls for passage of Assembly Bill 988.

The headline says it all.

On Saturday, July 16 the new 988 number launched nationwide, connecting callers with the National Suicide Prevention Lifeline. Folks in crisis now don’t need to look up a 1-800 number in order to get life-saving help over the phone. It’s a major step forward, but it’s just the first step!

988 has the potential to transform crisis response in California, ensuring that folks in crisis have someone to talk to, someone to respond, and somewhere to go. But to do that, 988 needs sustained funding (beyond the initial investments to launch the number) and a planning process that doesn’t leave anyone behind.

“988 is not merely a new number for an old suicide hotline, but is instead — or will be if handled properly — the kind of response system that mental health professionals, activists and even police say they want.”

Our sponsored bill, AB 988 The Miles Hall and Suicide Prevention Act, recently passed the Assembly Governmental Organization and Health Committees with unanimous bipartisan support and will soon be heard in the Appropriations Committee.

The Steinberg Institute is proud to stand strong in support of AB 988, along with author Rebecca Bauer-Kahan (D-Orinda) and our partners at The Kennedy Forum, NAMI California, NAMI Contra Costa, Mental Health America of California, The Miles Hall Foundation, Contra Costa County and Los Angeles County.

We’re thrilled that the Los Angeles Times recognizes the importance of this moment. Let’s seize this opportunity for California to once again lead the way.